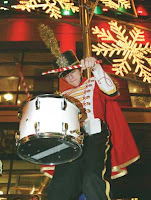 Since I had a little more time (and flexibility) with the kids this year than last, I decided to do up Christmas big time.  Santa's got a brand new bag.  If you need to up your Christmas game for the future (and you live in Seattle), consider this little recap your primer:

Snowflake Lane: This is a classic.  Two blocks from our old condo, this is the official sign of Christmas for our family.  Althought we only went three times this year, it's still a favorite and we really liked all the new characters and acts they added this year.  It's snows every night on Snowflake Lane!

Pacific Place:  This place has an indoor snowfall every night.  Fine but I liked it better the first time when it was called Snowflake Lane.  Also there's not even any performers. 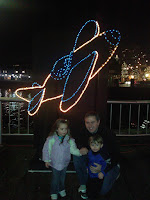 Toyland Village:  Its a bunch of cute Christmas light displays all along the Seattle waterfront.  We worked up an apetite doing the City of Seattle's holiday waterfront scavenger hunt and then took advantage of a little fried shrimp from Ivar's.  Very fun.

Christmas Village:  The Seattle Center House had a whole Christmas village set up with trains running through it.  All the miniatures were really cute and of course the kids liked the trains best.  I wouldn't call a miniature train village an A+ for toddlers though,  it was a 10 minute max activity for us. 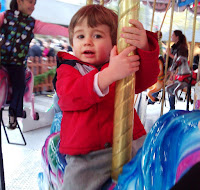 Carousel:  Very festive carousel set up in downtown across from Westlake Center. We went less than a week before Christmas so we encountered a little bit of a line.  Waiting in this line was not Andrew's favorite.  Riding on this carousel was Andrew's favorite.  So much so that I had to pry his fingers off the pole one by one amidst hysterical screaming (and probably several cell calls to CPS).

Gingerbread Houses:  These were insane.  There was one of Grand Central Station for pete's sake.  Way over the top, way delicious looking.  Leah was willing to take a bite to verify they were edible but we waved her off.

West Seattle Lights:  Just a private house with crazy awesome Christmas lights.  Not only were there like 29834263 million lights but they were synchronized (by color!) to music that you could tune your radio to.  Paul said they are the best Christmas lights he's ever seen.  My Mom said the same thing.

Gene Coulon Park: A fun little Christmas lights display down in Renton on the Lake Washington waterfront.  It is sponsored by Ivar's so of course it has dancing clam lights - a holiday tradition in every household.

Christmas Eve we had a delicous buffet dinner at our house and a Christmas program by the family: 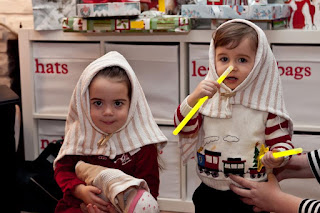 Everything on the program was great.  The Live Nativity had a few issues when Joseph hit baby Jesus on the head with a glow stick and threw it at the Christmas tree.  Mary was not pleased with his lack of professionalism.

Despite the behavior I observed leading up to Christmas, Santa did indeed come.  Leah's favoriate present was a Doctor's Kit which she has used to examine and diagnose every person that has been to our house so far.  Andrew is OBSESSED with a little basketball hoop we got him.  It could have been his only present and he wouldn't have cared.

What a fun Christmas we had.  Yes, it was full of nuts moments when I wanted to leave my children on a doorstep but that is to be expected with two toddlers.  Overall, it was great and went too fast!

I hope yours was great too.  Merry Christmas from the Wellers!! 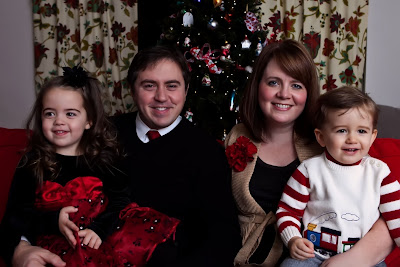 I'm thankful for these two little turkeys.  I'm also thankful that Andrew is not old enough to protest wearing overalls with a turkey on them that match his sister.  Because I think they look so cute! 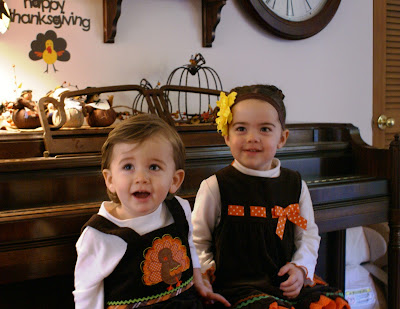 My brother tied the knot with his lovely bride, Emily, on 11.11.11.  We all traveled to Salt Lake City for the event.  The trip was relatively smooth with only a few crises including Leah locking us out of the bedroom with all the clothes we needed for the reception about 10 minutes before we had to change.  The wedding was great and the dinner/reception after was super fun.  A large part of that was due to the EW&F they played.  I worked out a lot of issues on that dance floor.  Leah and Andrew looked super duper cute for the pictures.  Even better, our nanny came and got them before the dinner so Paul and I could enjoy it without blood-curdling screams and/or food being launched at our faces.  A fun time was had by all.  Congrats E&E!!! 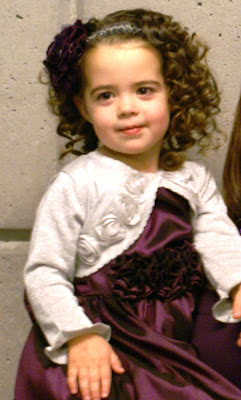 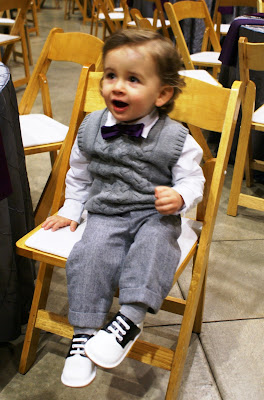 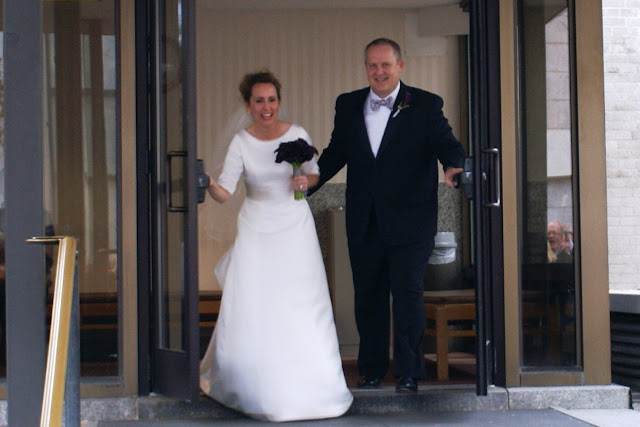 Halloween was fun this year because Leah was old enough to really understand what was going on and to get excited about it.  Dora is big in our house lately so I figured she and Andrew could dress up as Dora and Boots.  Then Dora herself threw a big wrench in my plans.  In Dora's Halloween episode she dresses up like a kitty cat. 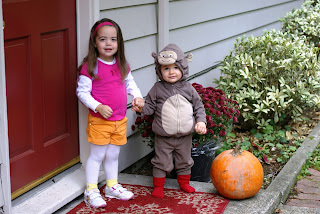 I was starting to get frustrated and then the whole thing became a moot point. 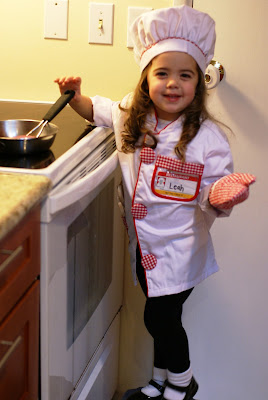 It turns out she is a genius because she looked so cute and was the only chef around.  Everyone loved the originality.  We went trick-or-treating at the mall and the people in all the kitchen stores like Williams-Sonoma went crazy for her and gave her like 8 pieces of candy.

Speaking of candy, she needs to work on her candy selection skills.  She chooses the worst ones.  We ended up with a pumpkin full of bit-o-honey, the pink tootsie rolls, and the orange marshmallow shaped like a peanut.  No good.

Andrew was, as usual, totally up for whatever.  He happily let me dress him in the cutest puppy dog costume and then sat contently as I shoved 239874234 pieces of chocolate in his mouth.  Loved it. 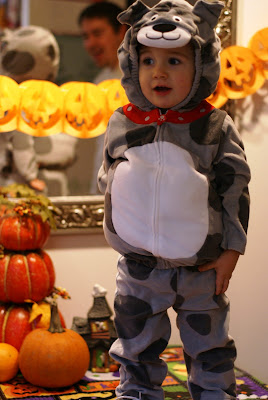 I can't wait to see what they ask to dress up as next year.
Posted by Esther at 9:01 PM 4 comments:

Real pictures and stories of Halloween are coming, but in the meantime I wanted to write a quick blog on the topic of teenage trick-or-treating.  A while back, a friend posted a question on Facebook about what people thought of older "kids" going trick-or-treating.  I didn't comment back but my knee-jerk reaction was highly negative.  Then I got to thinking about it and I wondered "What is my problem?"

I think a mini Snickers runs about $0.18.  If a 14-year-old kid is willing to walk from house to house (costume or not) for an 18-cent piece of candy, why not let them have it?  Our children are forced to grow up so fast these days.  If you read or listen to the news then you have an inkling of the sad and upsetting things that many teenagers participate in these days.

I think it is lovely if some teenagers are still so excited about the simple prospect of free candy that they prefer to go trick-or-treating versus going to some party with alcohol, taking drugs, or other common and risky behavior.  I hope my kids still want to indulge in an innocent activity like trick-or-treating at that age.

So next year, I say welcome the teengaers and congratulate them for holding onto their childhood a little longer by giving them an extra piece of candy!
Posted by Esther at 2:53 PM 2 comments:

Cupcake establishments I have patronized (possibly in order of preference)

Bands I have seen live (in progress)